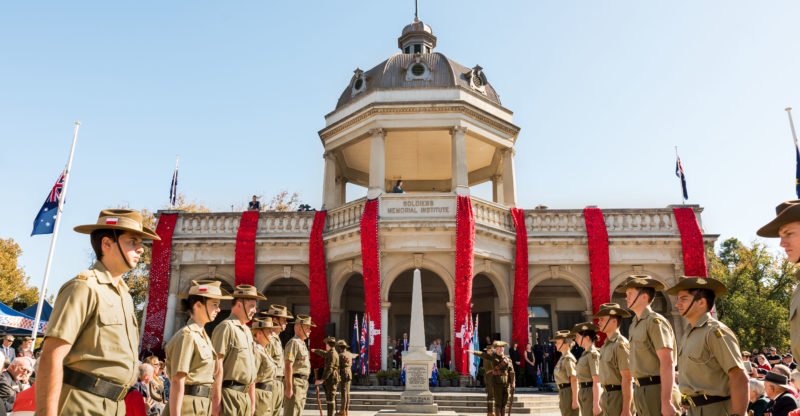 Our great nation of Australia honours our history annually. On April 25th, the anniversary of the landing of Gallipoli is honoured with commemorative services for our fallen men and women of the first world war, and conflicts since. In Bendigo our main ANZAC Day memorial site is in Pall Mall at the Soldiers Memorial Institute Military Museum.

The Memorial building itself officially opened to the Bendigo community on Tuesday 15th of November in 1921, the Governor of Victoria and Earl of Stradbroke, George Rous who served in the First World War as a colonel on the western front, unveiled the site.

The establishment of the memorial originated from a public meeting on the 13th of September 1917, as a way to remember the acts of the Bendigo soldiers in the Great War. Mayor Abbott presided over the meeting where it was approved to build the Soldiers Memorial Institute in Bendigo, and the motion was carried unanimously. The City of Bendigo gave its approval for the memorial to be erected a year later on the 6th of December at its current site, which was previously the Hustlers Royal Reserve No.2 Gold Mine, which was dismantled in 1919 to make way for construction.

Since then the building has been redeveloped and officially reopened exactly 97 years later on the 15th of November 2018. The $5.1 million revitalisation project of the Memorial included extensive conservation of the heritage building, plus the construction and extension of a new two storey wing to house and incorporate an exhibition gallery that better meets building and energy efficient regulations. The museum has gathered a broad range of wartime memorabilia since the opening in 1921, that was either donated or loaned to the Memorial by organisations and individuals.

It is supported by the Bendigo District RSL, and has a sub-branch that utilises the landmark and ensures the museum, gift shop and occasional exhibition run smoothly during opening hours. They recognise the 499 persons listed on the Roll of Honour and the ultimate sacrifice they paid, and from November 2019, also acknowledge those in Bendigo who gave their lives in the conflicts since, including World War Two.

The Museum features donated historical memorabilia for the public to come and see from 10am to 4pm every day.

Judith Leman sculpted a series called the last goodbye to commemorate the Australian Light Horse and the Eight million horses, countless donkeys and mules world-wide were killed in World War 1 between 1914-1918

As the positioning of the memorial is a prime location within the CBD of the City of Bendigo, and surrounded by the majestic beauty of Rosalind park, the memorial becomes a sort of hot spot for nearby town events like Easter, the Bendigo Bank Fun Run, White night and Sunday Market Day, among many other events.

Due to Rosalind Park and its own grassy area to the sides of the buildings, it is a quality location for picnics and meet up spot for friends, the nearby car park regularly hosts Sunday Market Day, and is used as the food court for Easter and Zinda Festival events in the park.

As the memorial is along the main street, any event that has a route running alongside it, places the Second Empire Style structure on display to the public. This includes the Fun Run by Bendigo Bank that has a warm up area before its event, and can have some participants running past up to 4 times, depending how many laps of the route they register for.

The Bendigo Easter processions also march past the Memorial, starting at the Chinese Gardens with the Awakening of the dragon, goes up Gaol road and across to Queen Elizabeth Oval on view street, all the way down View, and across Pall Mall in front of the memorial and finishes in Chapel Street.

The White Night run in 2018 also had the Museum as a very large focal point, as it was transformed by an entire projection of light, video and sound remembering the sacrifice of our ancestors. The display had moving poppies, doves and historical scenes with messages like ‘Victoria Remembers’.

During the lead up to Remembrance Day, November 11th, the Last Post is played every evening at 6pm on the forecourt of the Soldiers Memorial Institute, the last one plays on the 11th to commemorate the centenary of the armistice.

The Museum is really a prime location for all sorts of Bendigo tourism, from Easter to Christmas, including memorial services and even annual events such as the Bendigo Wine Festival, and Bendigo Heritage Uncorked, a city walking wine and food festival that includes the institute as one of the seven famous and historic landmarks of Bendigo.

Statues Around the Memorial 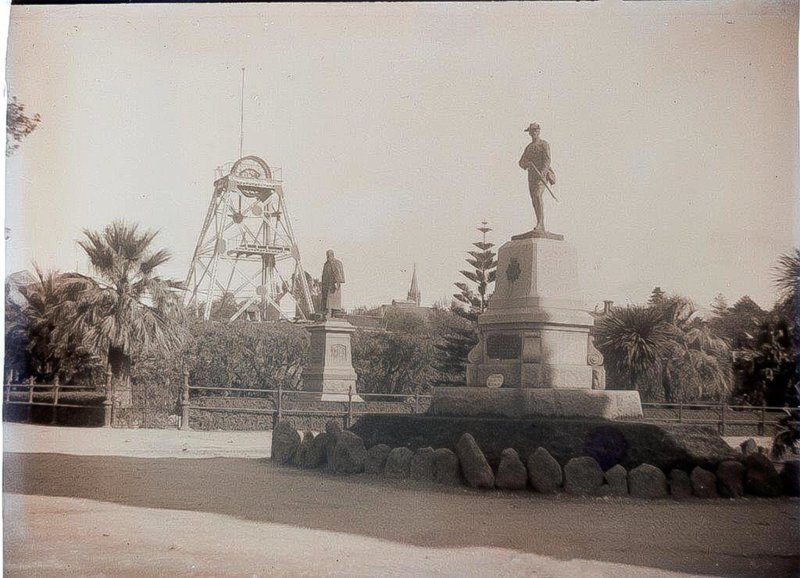 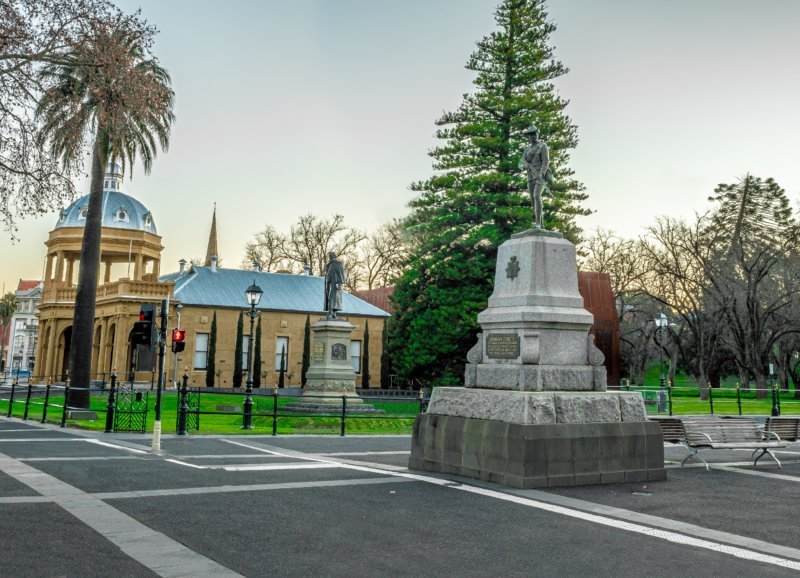 2020 Replica
Old Lost Bendigo Photos - The foreground statue was modelled by Mr John Walker, a young Bendigonian, who had studied for two to three years under Mr. A. T. Woodward art instructor at the Bendigo School of Mines.

Above is an early Pall Mall photo, shared by the ‘Lost Bendigo & District’ of Bendigo’s tribute to the memory of Australian soldiers who, in the South African war of 1899 – 1902 gave their lives for Queen and Empire.

The unveiling of the soldiers’ memorial statue was performed by Brigadier-General Gordon on the 11th of November 1904 in the presence of a muster of local defence force branches. George Lansell’s statue in the background is alongside the Hustlers Royal Reserve No 2 mine.