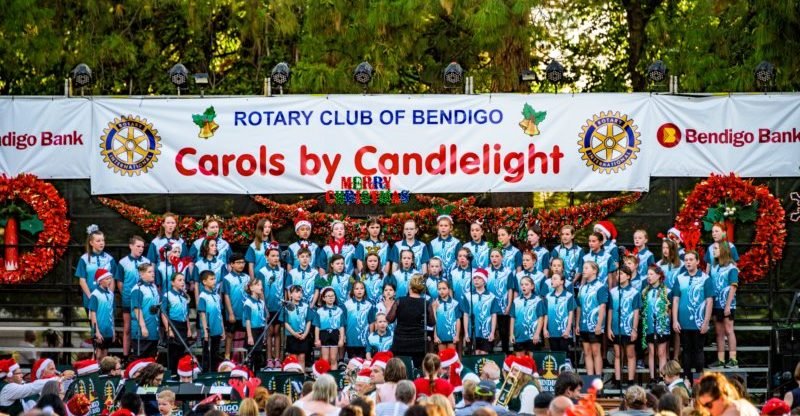 Hosted by Bendigo’s Rotary Club, the Bendigo Carols by Candlelight encompass the seasonal time of Christmas that overtakes everything of the last 11 months. The radio is playing the songs and the city really lights up with the decorations that are put on display. Bendigo really jumps upon the opportunity to create the atmosphere of Christmas throughout the region, with events and festivities to celebrate the time of year and the beginning of a new one.

Being a typical Australian, it wouldn’t be much of a stretch to assume that I and most in attendance would bring their own chairs and picnic rugs and an esky filled with cool treats to consume, whilst belting the lyrics to our favourite Christmas tunes, played and sung by our very best Bendigonian choirs and individual singers.

The Bendigo Carols by Candlelight History and Rotary Club

Presented by the Rotary Club of Bendigo, the Carols by Candlelight runs in the CBD’s Rosalind Park, on the last Sunday before Christmas Day, with 2019 being the 49th year.

The last few years have seen Rosalind Park, Pall Mall, as the gracious host, but previously the event has been run at Lake Weeroona, The Bendigo Showgrounds and the Town Hall, which was deemed far too small.

49 years ago when the Carols were first staged, it was a trial of something new that the committee was unsure would stick until the city’s thrilled response. Mr Jim Mahoney, a Bendigo man has been on the committee since it was established, and was formerly the Carols committee chair and deputy chair, and is believed to be the only member still involved in the initiative.

The committee was created to look at the projects the Rotary Club was involved in, and there is no other major event around the Christmas season like the Carols, and because the club had more people to volunteer and help out, it meant they had more success than others who tried establishing their own versions of the Carols.

2019’s entertainment brought along volunteer guests such as the Bendigo Brass Band, the Bendigo Youth Choir, and students from Spring Gully Primary School.

For some members of the Brass Band, the dedication of their time and energy to playing at the annual Bendigo carols by candlelight has become somewhat of a tradition, with many of them having been involved for around a decade. Some of the more veteran volunteers of the event are integral parts of the event’s success, by having the collective knowledge of music, history and contacts to know which assets make the Carols so beneficial to the community.

The Brass Band typically plays a set of their own, and also accompanies other community carols if needed. The Bendigo Youth Choir performed ‘Merry Christmas One and All’ a song written by Gail Godber just for the event.

The Volunteers and Sponsors

The Rotary Club with their wealth of members and ability to involve the community, means the team of people involved is large enough to have volunteers willing to be at the park from 6.30 in the morning to begin the process of putting together the whole event.

With staging and backdrops the most time consuming of all the volunteer work, along with the smaller jobs, like setting up the tables at the parks entrances for the public’s gold coin donations to support the Bendigo Community Health Services, for the handing out of candles and event programs to the wheeling out of the rubbish bins.

The number of volunteers were increased from the Bendigo Bank’s, 2019 event sponsors, who assisted with setting up barricades, generators, mobile toilets, some additional seating and a marquee for the entertainers to use.

Once sound checks are overseen, all that is left is for the Carols to have an audience to perform for, once the public begins to arrive around 6pm for pre entertainment and the event officially opened by the mayor Margaret O’Rourke at 8pm. The rest of the program follows until the jolly fellow himself, Santa, arrives at 9:30 with his entourage of elves and reindeer, including our favourite red-nosed Rudolph.

Sponsor, Bendigo’s 105.1 Life FM, broadcasted the event live on their radio station from the rotunda, and other sponsors such as the WIN Network, Bendigo Party Hire, Bendigo Hire, City of Greater Bendigo, Bendigo Signarama, Bendigo Advertiser, Suez, Good as Gold Carts, the Wilkinson Family and Scott’s Mascots and Costumes all integral parts of event, who help make it experience that it is.

Gallery Links – Carols through the years