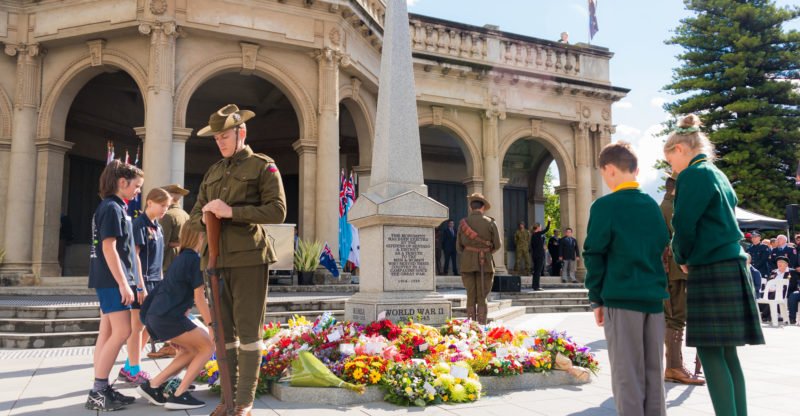 In our great nation, we honour our history annually on April 25th with a commemorative service for our fallen men and women of the first world war, and conflicts since. The main Bendigo ANZAC Day memorial site is in Pall Mall at the Soldiers Memorial Institute Military Museum.

ANZAC Day at the Heart of Bendigo

Bendigo ANZAC Day is at the heart of Bendigo, quite literally and figuratively, and many people are willing to sacrifice their time and sleep to be up in the cold and dark early mornings of Autumn for the various dawn services. The Military Museum hosts a dawn service beginning at 5:50 am at the Institute and marches not too far down the road to the Cenotaph in View Point, right next to the fountain. The service itself commences at 6am , it is purely ceremonial and no wreaths are to be laid, as that occurs at the later ceremony.

Then four and half hours later at 10:30, the memorial service begins with a collection of community groups and veterans marching from the Town Hall in the Bull Street Precinct down to the entrance of the Soldiers Memorial in Pall Mall.

At 11am the service commences with a moment of silence on the forecourt of the building as thousands of Bendigo residents line along the sidewalks to honour the veterans.

Members of the community speak with words of remembrance, and commemorate the lives sacrificed, as others come and lay wreaths at the base of the stone memorial.

“We shall honour and give thanks to the men and women that have served, and those who are still serving and those that paid the ultimate sacrifice for the great country in which we reside.”

The original time of the landing in Gallipoli was at dawn, and as such many of the services and marches are held at this hour to commemorate the occasion with utmost respect. The Australian War Memorial has a text that states “The half-light of dawn plays tricks with the soldiers’ eyes and from the earliest times the half-hour or so before dawn, with all its grey, misty shadows, became one of the most favoured times for an attack. soldiers in defensive positions were therefore woken up in the dark, before dawn, so that by the time the first dull grey light crept across the battlefield they were awake, alert and manning their weapons. This was, and still is, known as the “Stand-to”. It was also repeated at sunset.”

During the Bendigo ANZAC Day Services, when the march is in progress there are protocols to be followed, and as such must be adhered to. In general the Next of Kin (NOK) representation is limited to one per veteran and can march in place of the deceased veteran, within the allocated group as listed in the Order of March. They must also be dressed appropriately and are to wear medals on the right breast and it is not supported for them to carry photographs of relatives.

Veterans themselves know their own protocols, and are dressed appropriately with their medals displayed on their left breast of the coat or corresponding place on the dress, with certain exceptions. The medals are worn to show the Sovereign’s head, and are worn in the order of Campaign dates, the first being obtained being farthest from the left shoulder. If a veteran needs to, they are able to be accompanied by one carer who can assist them when required and if needed.

Other public locations in the city hold their own ANZAC Day Services, and allows for city residents to choose which service to attend in Bendigo and its surrounds.

A special place to prompt reflection and understanding of the sacrifice of country, and defence of our freedom during times of war and conflict. The Memorial building itself officially opened to the Bendigo community on Tuesday 15th of November in 1921, and was previously the Hustlers Royal Reserve Gold Mine. It was renovated and re-opened to the public exactly 97 years later in November 2018.

Eaglehawk War Memorial is located in Brassey Square, and consists of an obelisk characterised by its plaques and wreath ornamentation. It was unveiled on August 5th of 1922, the memorial commemorates the locals who served in the First and Second World Wars, Korea, Malaya and Vietnam.

Eaglehawk’s dawn service begins at 6am, held at the Brassy Square Memorial on Eaglehawk Road. At quarter past 6 a gunfire breakfast (a tradition of coffee with rum added) is available at the Eaglehawk Fire Station.

Later at 8:20 the service personnel march from Peg Leg Road to Brassey Square’s assembly area in front of the Citizens’ Brass Band Hall. At half past the service commences and afterwards morning tea is held at the Fire Station.